What game(s) are you playing through right now?

Fighting the Hydra, how the hell do I kill this damn thing!!!

holy crap, i'd be happy to get one or the other

holy crap, i'd be happy to get one or the other

I would take the Wii over the PS3 anyday. Best Buy salesman told me that PS3's suck.

I beat Zelda last night. It took 46 hours, which is a pretty big game compared to God of War which only took 9 hours. Best Zelda evarrrrrrrr.

shadow of the colossus!!!! amazing game!

the best graphics i've seen on the old ps2 in a long time!!

and i got half-life for the ps2 as well, classic FPS and soo much fun!

Man I suck playing these games.. Besides being stuck on God of War, Gave up on finishing Fear Effect 2,Silent Hill for PS,PS2  BloodRayne, Red Faction(at the very end on that one.) Had no problem with Medal of Honor series or first Fear Effect. Resident Evil series  up to last PS2 game completed.

You're stuck on God of War, but didn't have a problem with Medal of Honor? You're crazy!

I kept getting so frustrated with the Gamecube version of MoH: Frontline that I gave up...I hate doing like a 20 minute mission and dying right at the end and having to restart the whole thing.

I was bummed out since I beat Zelda, but then I remembered the new Castlevania had come out! 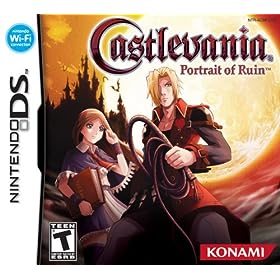 Nice! I'm not too far into it, just started yesterday, but it rules so far. I kinda miss the soul system though.

Well, I beat it last night. The whole thing with the good ending...shit, I'm gonna need another game soon. I'm going for 100% of all the maps though, maybe that will take some time.


I was thinking the same thing. But the whole concept of jumping into the paintings is cool. "Nation of Fools" blew my mind the first time I went in there!

I'm still working my way through Portrait of Ruin. But I'm simultaneously playing Circle of the Moon (GBA) at the same time. I keep the DS by my bedside but I take my Game Boy Micro with me everywhere.

I just can't get enough Castlevania! After these I might go back and play through Harmony of Dissonance, Aria of Sorrow, and Dawn of Sorrow again on hard mode.

My Ps2 is breaking.

The Legend Of Zelda: The Twilight Princess

Awesome game so far, Still getting use to the Wii but i've gotten the hang of it for now

Civil War A Nation Divided for PS2
Pretty good  as long as you can get over some of the unrealistic aspects.  Yes there was a primitive form of grenades during the war, but the common soldier didn't carry them around and use them like during WWII, Mostly used during seige operations. And why do they have Springfield muskets and not the British import Enfield rifled musket one of the most common used by the Rebs next to the consfiscated Springfield musket. And the main rifle the Confederate starts off with is the 1855 Sharps, not readly available with Johnny Reb in very small numbers.
I'm nit picking of course like it ,overall it's a Medal Of Honor for Civil War buffs. Always wished they would of come up with something like this for PS2, Why did they wait until the near end of platform ?

Yet another custom module for Neverwinter Nights.   This one is called "Runes of Blood", and is an unsually good module, being both interesting from a role playing standpoint and well-balanced in terms of game challenges.


I played that along time ago. It was pretty fun.

My friend has a game shark, so i'll get Celebi.

Right now my 360 is in "red rings of death" mode and I'm waiting a better firmware update before having the new motherboard put in.

So although I been pretty busy been screwing around with the WII a bit.  Mostly WARIO WARE : Smooth Moves but been playing around with Zelda a bit too.

Back to Reverse Polarity