Can I switch support to a different team in middle age?


37 replies to this topic

As with any relationship, if it is dysfunctional it is best to end it.  Abandoning the Seattle Seahawks years ago was one of the best decisions I ever made.

Anybody can correct me if I'm wrong, but I would say that generally Americans are more polyamorous when it comes to sport affection.

I root for both the Royals and Cardinals in baseball because I grew up exactly halfway between them with parents who didn't care at all, so it seemed to fit (it's the Royals in head-to-head, and has been since '85).

I'm the same way with baseball. I like the Blue Jays because they're the closest geographic team to me, but I also like the Tigers because they were my grandfather's and dad's favorite team.

I root for the Oakland A's and the L.A. Dodgers.  The Swingin' A's of the early 70's were my first love as a young baseball fan, then I lived eight years in SoCal and grew to love the Dodgers (Garvey, Cey, Yeager, Lopes, Monday...).

Think of it as a divorce and a new start.

The idea that a person is required to remain loyal to a sports franchise because of some unspoken rule is comical to me.

Back the team you want to back and f**k anyone who doesn't like it. 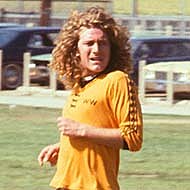 In 2004, after the Red Sox dropped game 3 of the ALCS to the Yankees, I said I was going to become a Washington Senators fan.  The Washington expansion team hadn't been named yet.  My son was a year old, and I said I wasn't going to put him through being a Red Sox fan.  I wasn't going to become a fan of a team that would directly compete with the Red Sox though, that would have been tough.   But we stuck it out.  The marriage analogy makes me smile.  Sometimes you do have to grind it out.  But it's worth it in the end.

And, similarly, you go to Hell if you break your vows.

I'm still a fan of the Cucamonga Quakes minor league even though the Angels and Dodgers switched a decade ago with the other team being the Inland Empire 66ers in San Bernardino.  I only root against the Quakes if IE plays them.

You can switch teams any time you like.  So long as you're not switching to the Cowboys or Red Sox.

You can switch teams any time you like.  So long as you're not switching to the Cowboys or Red Sox.
Or Yankees

You can switch teams any time you like.  So long as you're not switching to the Cowboys or Red Sox.

Cowboys nation would be glad to have you, little Quisling, as long as you understand things aren't quite like they used to be, and when the hoi polloi pop off about Dallas not winning anything for more than a quarter century, we just have to take it! (And console ourselves by looking at the trophy cabinet . . .)

It's sports that almost certainly have no bearing on life, unless you're a gambler. Be the best damn fan of whatever team you want to support with the knowledge that you may catch heck for it from your friends if they are fans of your former favorite.

I deal with kinda this type of thing from others mainly for the fact that most everyone that lives where I do comes from somewhere else (self included). So I find what happens is folks will adopt the local teams until their old home team plays the local team. Maybe not exactly the same situation your post is exploring but I think it's fine to have a couple of favorite teams to root for. If it turns out you pick another one & only all time favorite that's cool too. It's almost like when you were young & found the 1st love of your life. At that time you thought it would go on forever but as time wore on your life's journey placed a life long partner who is someone completely different. But you can always think back to the one you 1st loved. For me as a kid my favorite NFL team was the Miami Dolphins. When I moved to Tampa I started to root for the Buccaneers (I always was a sucker for the underdog lol) 34 + years later the Bucs are my favorite above all else but I still nostalgically root for the Dolphins too.

There was no Seahawks when I was growing up in the mid-60s to mid-70s and as a result I rooted for the Packers, Chargers and Raiders. Still have a soft spot for all 3 but once Seattle got a team I had hard rooting interest only for them..

When I was a kid, my parents were on opposing sides: Dad was a Yankee fan and Mom was a Dodger fan (she'd been a fan in the Brooklyn years) so it could get intense.  Later on our family became big hockey fans due to my Mom going to Salt Lake Golden Eagles games when they first came to Salt Lake.  That was my first sport I got crazy about but since we weren't anywhere near an NHL team, I didn't have a team I followed (except the parent club for our team and that changed a number of times)  I watched as much hockey as I could (this was long before cable) but in our area the sports folks didn't really care about it, basketball was king.  So I have always watched the teams and picked out players I liked and went from there.

Most times I always pull for the underdogs because I am sentimental and love upsets.  I know my eclectic choices in teams irritates some on the NHL thread but that has always been my way.  So I have a favorite since around 2009 which is the Chicago Blackhawks but I also have two others that I follow ( Avalanche because they were my Mom's team and sometimes Vegas but not so much this year

Now, college sports are a different kettle of fish, you must remain loyal to your alma mater no what

So every fall we attend the Utes football games, have had season tickets for close to 25 years.  That's where I will draw the line and stick with them through thick and thin.

So enjoy your sport and root for teams and players that make you love it even more, to me that's the true joy and attraction of sports.

Hate the ownership, not the team.  I know this very well since Arte Moreno doesn't care about pitching and has us back to the old 90s days of being a retirement home for aging veterans who peaked like Dave Parker, Fernando Valenzuela and Bo Jackson.  Take out Trout and Ohtani and it's just Salt Lake Bees.

Back to One Little Victory