Neil Peart Has Passed Away 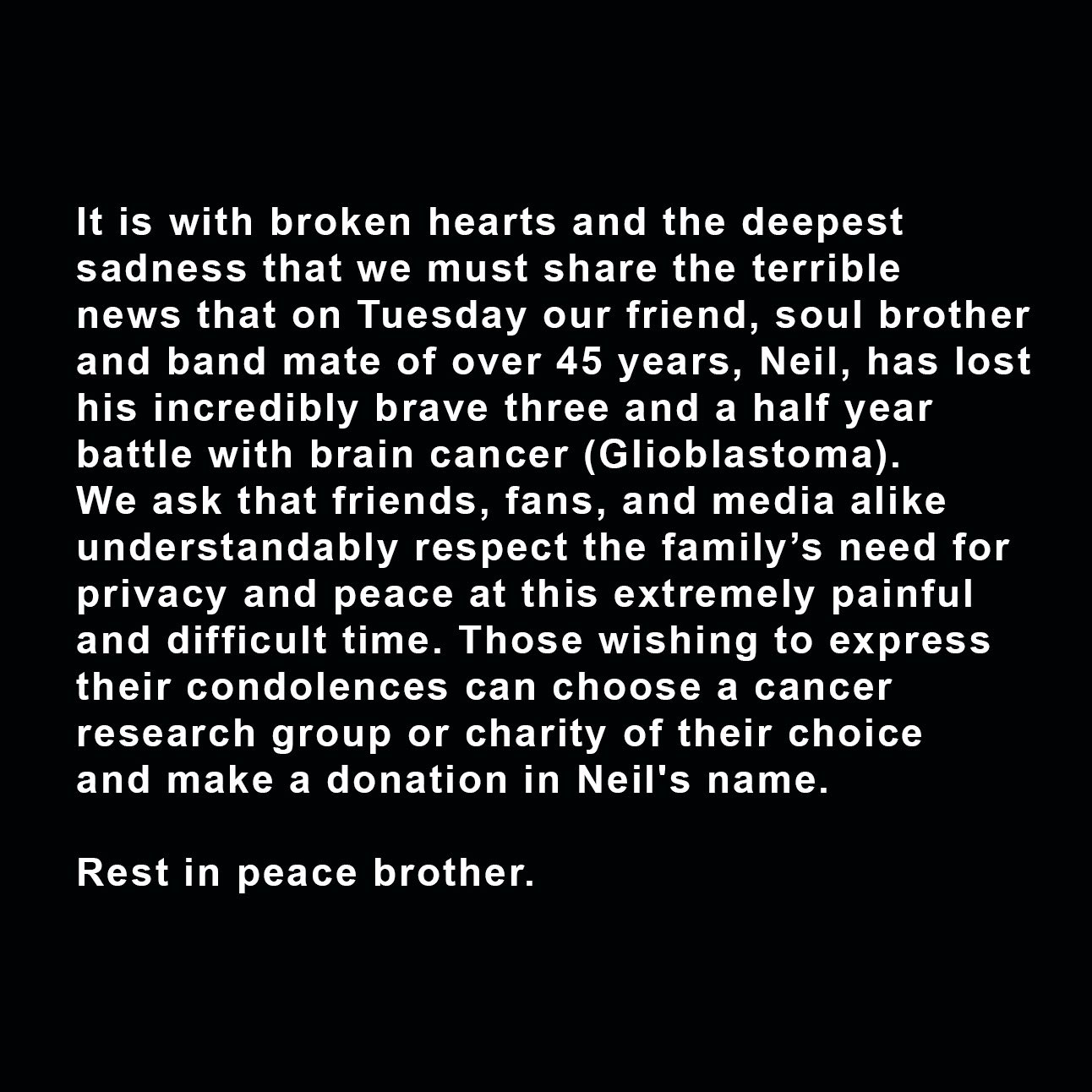 Neil Peart, the drummer and lyricist for Rush, died Tuesday, January 7th, in Santa Monica, California at age 67. The cause was brain cancer, which he had been quietly battling for three years, according to Elliott Mintz, a spokesperson for the Peart family. A representative for the band confirmed the news to Rolling Stone.

Peart was widely considered one of the best drummers in rock history, with a flamboyant yet utterly precise style. He joined singer-bassist Geddy Lee and guitarist Alex Lifeson in Rush in 1974, and his virtuosic playing and literate lyrics  – which drew on Ayn Rand and science fiction, among other influences – helped make Rush one of the key bands of the classic-rock era. A rigorous autodidact and a gifted writer, he was also the author of numerous books.

“Neil is the most air-drummed-to drummer of all time,” former Police drummer Stewart Copeland told Rolling Stone in 2015. “Neil pushes that band, which has a lot of musicality, a lot of ideas crammed into every eight bars — but he keeps the throb, which is the important thing. And he can do that while doing all kinds of cool shit.”

Rush finished their final tour in 2015; Peart was done with the road and eager to spend more time with his wife, Carrie Nuttal, and daughter Olivia.

just saw this on CBC I'm at a loss

So sad  RIP Neil. Not sure what to say. I’m sorta stunned.

In shock. So sad to hear this. thoughts and prayers to his family.

I can't even deal. RIP you legend

I'm surprised that no other media outlets are reporting this given that he allegedly died three days about. Sad, if true, of course.

Shock is the right word. f**k.

I’m in a super market trying to hold back tears. I can’t think straight at the moment. WTF!

I'm stunned.  This doesn't feel real at all.

Now the reports are coming in:

I am just floored.

Heartbroken for his family, his bandmates, and us.

This will hit some fans harder than others. I worry that those who still held out hope for a Rush reunion are going to be particularly stricken.

I am also at a loss...will have to post again later. Just gutted.

Omg I can’t believe this. Shock and stunned sadness. One of my true heroes.

I have often wondered how I would feel when one of them eventually died...even worried about how much I might be affected by it. Turns out, I'm only a little bummed. I'm mostly sad that his daughter won't have him in her life any more.

I'm devastated, utterly devastated.
Thank you Neil for some of the greatest musicianship I've ever had the pleasure of witnessing live and in person.

f**k I knew this was coming


9 user(s) are reading this topic